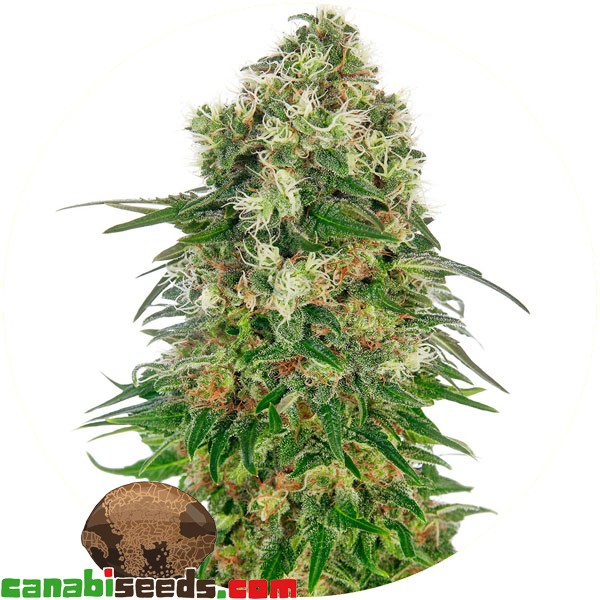 SEN.155
Shiva Skunk, the super-resinous Skunk hybrid, is among the most potent indica dominant strains ever created and now her sublime genotype is available as a feminized autoflowering cannabis strain!
Not Rated Yet Seed Bank Sensi Seeds

Sales price 30,00 €
Sales price without tax 27,27 €
Base price 27,27 €
Base price for variant 27,27 €
Variant price modifier:
Salesprice with discount
Discount
Tax amount 2,73 €
Price / kg:
Ask a question about the seed
Shiva Skunk, the super-resinous Skunk hybrid, is among the most potent indica dominant strains ever created and now her sublime genotype is available as a feminized autoflowering cannabis strain!

The vigorous growth of Skunk #1 and outstanding resin production of NL#5 are undiminished, while the influence of the Ruderalis parent means that plants begin blooming according to their age, regardless of day length or photoperiod.Shiva Skunk Automatic can be grown indoors with lights or outdoors during the spring and summer in most temperate climates. Indoors or out, Shiva Skunk Automatic plants begin flowering automatically around the time they produce their fifth to eighth set of full-sized leaves, which normally happens after 6 to 8 weeks of vegetative growth. Plants will reach final heights of 90 to 140cm during the 8 to 10 week flowering period which follows.

This strain exudes the Shiva family’s characteristic flavour and scent - a blend of pungent skunk musk and sweet citrus.

Shiva Skunk Automatic is an unbeatable all-round strain! It has all the easy-growing features of a Skunk - vigorous and compact with thick, fast-developing buds. In addition, the influence of NL#5 means that Shiva’s branch of the Skunk family tree is by far the most potent. Shiva Skunk Automatic has the extra advantages of being a feminized, autoflowering variety! For cannabis seeds with the best combination of simple growing and super potency, choose Shiva Skunk Automatic!

The Shiva Skunk Auto strain has large proportion of Indica genes in its background.

Shiva Skunk Auto will have a comparatively short flowering time.

Shiva Skunk Auto will have relatively small height gain during the flowering phase.

Shiva Skunk Auto will produce a decent amount of bud

Shiva Skunk Auto is a tough, early flowering strain suitable to be grown outside in most climates